Bill De Blasio's legacy will be:  the Most Corrupt Mayor since William Magear (“Boss”) Tweed, the “Tiger of Tammany,” 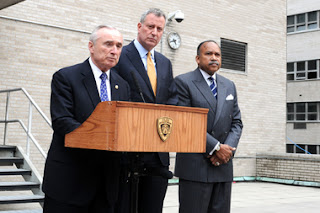 LINK
NEW YORK CITY — A third high ranking NYPD official has filed for retirement amid the federal corruption investigation into a pay-for-favors scandal in the nation's largest police force, DNAinfo New York has learned.
Deputy Chief Michael Harrington, who was stripped of his badge and gun nearly two months ago, handed in his papers at Police Headquarters on Thursday, sources said.
The three-decade veteran, who was second in command in the NYPD’s citywide housing bureau, is the third top commander this week to leave the NYPD since Commissioner Bill Bratton said he expected arrests in the probe.
Harrington, who comes from a long line of respected officers, served previously as the right hand man for then-Chief of Department Philip Banks, who was the initial target of the now 2 1/2-year federal investigation.
Under city regulations, officers who retire are guaranteed their respective pensions even if they are arrested and convicted of a felony. Commissioner Bratton has 30 days to file charges against an officer, if warranted, that would halt their departure until the charges are resolved.
Banks, who has not been charged with any crime, took trips and junkets with two wealthy businessmen, Jona Rechnitz and Jeremy Reichberg, who served on Mayor de Blasio’s Inauguration Committee.
The federal investigation of the NYPD centers on allegations that police officials took gifts in exchange for favors. The probe has also expanded to City Hall, where top mayoral advisers are being eyed over how they raised funds for various de Blasio political agendas.
Roy Richter, president of the Captain’s Endowment Association, declined to comment.
Deputy Chief David Colon, a 30-year veteran, filed for retirement on Wednesday, a day after Deputy Inspector James Grant pulled the plug on his career just shy of his 20th anniversary in the department.
Colon was known to hang out in the now-shuttered Harlem restaurant Hudson River Café, which was owned by Hamlet Peralta, a suspected con man recently arrested by the feds for operating a $12 million Ponzi scheme linked to the corruption scandal.
READ MORE: How Everyone is Connected in the City Hall/NYPD Corruption Probe
Deputy Inspector James Grant, who had served as the commander of the Upper East Side's 19th Precinct before his name surfaced in the scandal, is suspected of taking discounted jewelry and a trip to Las Vegas on a private jet from the two businessmen in exchange for police escorts.
Police officials said this week that they can't prevent individuals from retiring. However, they were able to reject a retirement application from Detective Michael Milici, who served as the Community Affairs officer at the 66th Precinct in Borough, because he took the Fifth when approached by the FBI — a violation of departmental policy.
Milci, who had more than 20 years on the force, was instead fired by Commissioner Bratton. But because of his tenure he is allowed to collect his full pension.
As many as another 10 officers — mostly high level officials — have been caught up in the federal probe, including two in the License Division who are suspected of taking money in exchange for gun permits without proper background checks.
Posted by Betsy Combier at 2:26 PM

"From Justice, as a fountain, all rights flow"
Black's Law Dictionary

We went to a Hearing with Senator John Sampson on September 24, 2009 on the New York Judicial Syatem. A few people were able to speak, and many others signed up to speak at a later date...that Sampson never scheduled.

First published in print: Monday, January 11, 2010
Here we thought that the first order of business this year for state Senate Democratic leader John Sampson would be to help regain that institution's credibility by passing radical ethics reforms.

The need for them would seem to be brutally obvious, in the wake of the conviction of former Senate Majority Leader Joseph Bruno on federal corruption charges and Governor Paterson's calls for requiring state officials members to disclose their outside income. First, though, Mr. Sampson has joined a large Manhattan law firm where one of the founding partners is on the board of the state Trial Lawyers Association.
That's right. Mr. Sampson now works not only for the people of New York, but also for the firm of Belluck & Fox, according to a New York Post report.

His salary in the former position is a matter of public record, of course -- $88,500. His salary in his new job, however, is something Mr. Sampson isn't about to disclose.

Imagine, then, what people might think if this is one more year when the Legislature fails to pass ethics laws. Or if it does, only a watered down version of what's need to clean up an institution where criminal indictments and convictions have become too commonplace?

What were Mr. Sampson's priorities, they might wonder -- transparency in government, or shielding from both his own finances and Belluch & Fox's clients?

The same questions might be asked as well of Assembly Speaker Sheldon Silver, who holds a position of counsel to another Manhattan law firm, Weitz & Luxenberg. Little is known by the public about that arrangement, too, thanks to the alarmingly inadequate financial disclosure requirements for legislators that Mr. Silver seems to think are entirely adequate. We know he works for that particular firm, one of the largest tort law firms in New York, but we don't know what the nature of his work is, or on whose behalf he does it.

That will become all the more relevant in the event someone else in the Legislature tries to push for rewriting the state's medical malpractice laws or otherwise changing tort laws this session. Two of the most powerful people in state government work for law firms closely associated with the leading opponent of such legislation, namely the Trial Lawyers Association.

In Mr. Silver's case, he rather famously said of his legal work a half-dozen years ago, "I don't think it's a conflict. How many times do you want to hear this?"

In Mr. Sampson's case, the word comes from his office that his outside work won't interfere with his official duties.

Not exactly endorsements of ethics reform, are they?

The state Senate Democratic leader has another job, too, not that he wants to talk about it.

When ethics reform is a major issue, how serious is he about stronger financial disclosure requirements?

Accountability is the Key

Who is a Victim-of-Law?
Victims-of-Law are persons who have been subjected to tyrannical or arbitrary rulings or edicts in violation of constitutional and civil rights under the democratic maxim reminiscent of our Republic -- the "Rule of Law"

The victims of unethical and corrupt lawyers, judges and employees of the state and federal judiciary demand accountability from those who abuse the power of office while they remain absolutely immune. The media as well as the legislative and executive branches of government traditionally ignore these abuses. The judicial branch itself hurls insults at the victim claiming they are nothing more than a 'disgruntled litigant' while ignoring substantive allegations.

It is essential to empower the victims of legal abuses. Our strength is in our numbers thus the more people that demand their constitutional and civil rights the quicker they will be attained.

What most people do not comprehend is that judges are immune from civil lawsuits. If a judge unlawfully imprisoned someone or maliciously denied due process in a case that cost a litigant millions of dollars, it doesn't matter. There is no redress for the aggrieved person.

The emotional and physical health problems inherent in these abuses are now coming to light but the judicial branches throughout our country continue to avoid or deliberately ignore what they have helped to create.

What is the "Rule of Law"?
Equality and the Law

The democratic state cannot guarantee that life will treat everyone equally, and it has no responsibility to do so. However, writes constitutional law expert John P. Frank, "Under no circumstances should the state impose additional inequalities; it should be required to deal evenly and equally with all of its people."

No one is above the law, which is, after all, the creation of the people, not something imposed upon them. The citizens of a democracy submit to the law because they recognize that, however indirectly, they are submitting to themselves as makers of the law. When laws are established by the people who then have to obey them, both law and democracy are served.

Reprinted from the National Constitution Center

The Supreme Court
The Framers considered the rule of law essential to the safekeeping of social order and civil liberties. The rule of law holds that if our relationships with each other and with the state are governed by a set of rules, rather than by a group of individuals, we are less likely to fall victim to authoritarian rule. The rule of law calls for both individuals and the government to submit to the law's supremacy. By precluding both the individual and the state from transcending the supreme law of the land, the Framers constructed another protective layer over individual rights and liberties. --Reprinted from U.S. Dept. of State

Judicial Immunity is Absolute
In an unprecedented degree of 'abuse of power' judges decreed themselves absolutely immune from civil suit when they are "acting maliciously and corruptly." In 1996 the 104th Congress passed the Federal Courts Improvement Act amending the Civil Rights statute to give further immunities to malicious and corrupt judges.

(c) Civil Action for Deprivation of Rights.--Section 1979 of the Revised Statutes (42 U.S.C. 1983) is amended by inserting before the period at the end of the first sentence: ``, except that in any action brought against a judicial officer for an act or omission taken in such officer's judicial capacity, injunctive relief shall not be granted unless a declaratory decree was violated or declaratory relief was unavailable''.

We Are Bradley Manning

RICO in the New York State Unified Court System: How the Courts Steal Your Property, Your Children,

Office of the Inspector General

Links on E-Discovery and E-Forensics of Judicial Proceedings

Mary Mack, Esq., on e-Discovery: "A Process of Illumination"

Justices of the First Department

Judicial Council of the Second Circuit

Without a Prayer For Relief by Betsy Combier

Senate Judiciary Committee Hearing on The DDC and CJC Corruption

Advocate for truth and An End To Judicial Immunity

On Sunday, August 16, 2009, a friend of a friend called me at approximately 2:10PM, a Mr. John Libecci. Mr. Libecci is, I understand, a private investigator who knows a friend of mine socially. I asked whether he could help me find out some information involving my federal court case filed in United States District court on June 8, 2009 involving the Surrogate Court and my mother's Will. After I told him about the property being taken by the court, he told me that the court never takes property without a reason; after I told him that the Will was never probated since I filed the Will (of my mom) on March 17, 1998), Mr. Libecci told me that "obviously the Will was not done right", and said that he worked for the Courts and the Judges. He would not tell me what he did for the Court and the judges, then hung up. If anyone has information about Mr. John Libecci please email me at betsy@parentadvocates.org. You may send me any information anonymously.